After featuring 5ft 10 Kate Middleton in the first 'Tall star style' I am now presenting to you the second installement.  I did think about featuring Princess Diana (who would be Kate Middleton's Mother-in-law if she was still alive).  I found out the other day that Princess Di was 5ft 10 too!  Strange coincidence!

Today I saw a lovely picture of Liv Tyler and remembered that she is 5ft 10.  NOT all of these posts will be 5ft 10 celebrities, but I thought I would start the first posts at this height to fit in with the blog name!

Live Tyler is the daughter of model Bebe Buell and Areosmith frontman Steve Tyler.  No wonder she is so stunningly beautiful and tall!


Style
Live doesn't always get it right in some people's eyes, but always embraces what she wears.  She fluctuates between classic chic heeled pumps, tights, dress and mac combination, and hippy inspired floral / loud prints.  I guess that is the result of her mum's classic model style, and her dad's hedonistic, indulgent band persona! 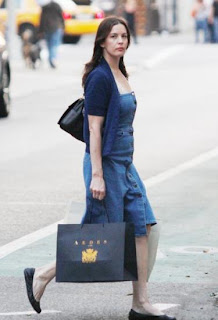 Here she is during a shopping trip to Aedes wearing simple flats, denim dress and navy cardigan.
Liv wearing Louboutin pumps (again) and a clever hourglass shaped dress by Stella McCartney- see how the black panels give the illusion of a smaller waist?
She likes to hint at classic style and vintage hair/makeup, but most pictures seem to show her hair down and natural when she is 'off duty'.
Of course, most makeup artists will make a feature of her full lips!
Shops at
High end designer mostly unfortunately.
Givenchy- well she is a brand ambassador and singing for their new ad!
It's actually been hard to find evidence of other designers Liv likes!
Places like;
Mytheresa
Net-a-porter
Liv is quoted as liking European style such as Isabel Marant, G-Star and Alexander McQueen.
At any rate, most of it is high end designer, rather than vintage or high street.
Shoes
Christian Louboutin!
Ballet flats
This has been a tough one to research and compose.  Not much to go on, but mostly pieces we could only dream of seeing, let a lone wearing!  Can you find Liv in any 'high street' pieces?  Zara, Topshop, River Island, Forever 21? No? Me neither!!
I like her vintage Tea dresses style, but I think that as she works for Givenchy, she probably has to wear their outfits a lot!  One to admire and file I think!
Any thoughts on Liv's Style?
Stand Tall x
P.s. Don't forget, lots of giveaways on the other blog for Christmas!
Posted by 5foot10 at 21:01

Thanks for taking the time to leave a comment. I read all of them and will do my best to reply.

5foot10
I am a 5 foot 10 girl living in a world made for shorter people. This is my fashion and lifestyle blog where I chat about fashion, health, tips, beauty, makeup, stories, inspirations, decor, recipes and travel.

All content including pictures on this website is copyright to 5foot10 or the original author and may not be reproduced in part or whole without the written permission of 5foot10.

All items are purchased by me unless accompanied by a disclosure a the end of the post. Items feature on 5foot10 are carefully selected and all posts contain my honest thoughts, regardless of whether it was purchased or gifted. Positive reviews can not be purchased. Any sponsored posts will be clearly marked.